Menu
Submit a Ticket
Get A Free Estimate

What are the 5 Not-So-Obvious Benefits of Revolving Doors?

A little History of Revolving Doors

The revolving door was invented and patented by Theophilus Van Kannel of Philadelphia in 1888, according to Wikipedia. The world’s first revolving door was installed in a restaurant called  in New York’s Times Square 10 years later. Nowadays, it’s extremely popular all over the world.

What usually a revolving door consists of?

A revolving door typically consists of three or four doors that hang on a central shaft and rotate around a vertical axis within a cylindrical enclosure. Large revolving door systems may have, in the central pivot, a small glass enclosure permitting the display of sculptures, mannequins, plants, and advertisements.

Revolving doors serve as an airlock, which keeps cold air out, thereby reducing heating costs. Revolving doors cut off the air path between the outside of the building and the inside. In colder climates, the difference can be very large. Opening a hinged or sliding door even for a brief period will let out a tremendous amount of heat, which increases heating costs for the entire building. With a revolving door, this doesn’t happen as there is never a point where the air can flow freely between the conditioned (inside) and unconditioned space (outside). The reverse should be true in hot climates, where the goal is to keep in the cooled air.

In 2006, an MIT research calculated that revolving doors exchange eight times less air than swinging doors, which can add up to thousands of dollars in wasted energy costs per building per year.

Revolving doors can be used for security purposes, involving radiation detectors and metal detectors. In that way, they allow for better control of the interior environment when compared to regular automatic sliding or hinged doors. Revolving doors allow large numbers of people to pass in and out easily and quickly. Revolving doors permit people to be going in and out of the door at the same time.

Hinged or swinging doors can create the wind that might be strong enough to blow small objects away. Revolving doors prevent that strong draft smoothly compared to regular automatic sliding or hinged doors.

Most revolving doors can accommodate strollers and those wheeled luggage bags. Revolving doors block much street noise from entering a building. The noise created by a hinged door opening and closing is silenced. Car and bus fumes are locked out too.

Architects love revolving doors as they make a building more aesthetically pleasing due to the size of the doors. There is a psychological effect at work. The space between the panels of the revolving door is quite small. When a person steps out of the door, the room they are standing in automatically seems larger than it really is.

“Disabled doesn’t mean you can’t do something. It just means you do things differently. You can do anything that you put your mind to!” Marshall 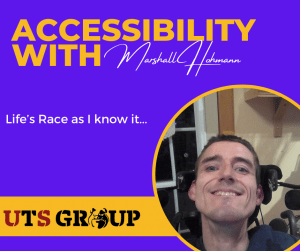 Accessibility with Marshall Hohmann: Life’s Race as I know it…

Accessibility What comes to mind when you hear the word accessibility? Most people think wheelchairs and ramps. That does affect those of us that use 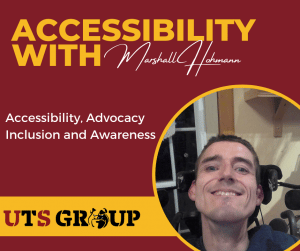 Hello my name is Marshall Hohmann, please allow me to share a little about myself. I am an Ability Awareness presenter for Marshall Talks. I

Read More »
Get A Free Estimate

Get updates about new services & offers

We are your one stop solution for all your security needs.